We all want to look good, right? Scratch that, we all want to look the BEST we can possibly do. We can also all agree that part of us wanting to get in the shape of our lives is to attract potential mates, right? WRONG! Matter of fact, this is a major flaw many people have nowadays. Many people start training with the idea of attracting the opposite sex in mind, but the truth is that this type of thinking and goal setting mentality will only hinder your progress and ultimately cause you to quit, especially when -not if- things get harder. Let’s look at two scenarios:

Which one do you think will achieve his goal(s)?
If you guessed Bill, you are incorrect! David will achieve his goals and Bill is most likely bound to fail. The problem with doing something new, especially something that involves changing a big part of your lifestyle is that it will be challenging, it will be hard and things will get even harder along the road. Also, since no one is perfect and we all make mistakes, the individual(s) in question will face some obstacles and make MANY mistakes before reaching their destiny. So, when you start training and dieting merely to attract women as your main goal, I PROMISE YOU that you will quit when your strength or body composition plateaus.
Here are some reasons why Bill will fail:
Plateaus
Ask anyone who lifts weights, trains for endurance, works on his cardiovascular capacity or does any type of physical exercise that involves progressing over time whether they have plateaued at some point during their journey or not. Mainly ask those who have been in the game for a long time and are at least somewhat successful. Their answer will be; YES! The human body is an incredible complex machine, however, as much as we would like to be, progress is not linear. Making progress in the gym will be linear for some time, especially if you are a newbie who has never lifted weights in his life. Only then your progress will most likely be linear (some newbies don’t even experience linear progress). For the rest of trainees who have been doing this for a while, progress follows more of an irregular pattern where progress can continue for some time, then stall, then out of nowhere it skyrockets, then levels off for some time…etc. It’s almost always never linear. Your strength levels will plateau. Your fat loss will plateau, especially the leaner you get. The leaner you become, the harder it becomes to lose body fat due to many physiological mechanisms. Adding some lean muscle mass to your frame will also plateau and you will wonder what you could possibly be doing wrong. Here is the thing; you are probably not doing anything wrong! I said probably, because some people will obviously go against the rule. Anyway, that’s just part of the game, and if you don’t have the discipline to push through those hard times, you will quit as you face the first obstacle. You will not want to step out of your comfort zone and push through it. This leads me to the next point.
Settling for less 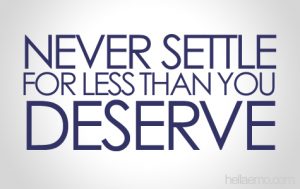 So, Bill mainly trains to attract ladies, right? Let’s say he keeps training for 6 months where things go great for most newbies and they don’t face any obstacles. Bill had an initial goal of putting on 15 pounds of muscle. During the six months Bill trained for, he successfully added 10 pounds of muscle to his frame. He trains for an additional month for a total of 7 months and boom, Bill encounters his first obstacle! His body just doesn’t want to build any more lean mass! Hmmm…Bill is frustrated, I mean he only needs 5 more pounds of muscle to look fantastic for the ladies and achieve his goal, right? He trains for 2 more weeks hoping things magically fix themselves and the muscle fairy grants him his wishes while he is asleep. Unfortunately for Bill, life doesn’t work this way. Bill then becomes content with what he has achieved so far! And this, my friends, is a dangerous phenomenon known as “settling for less”. Bill convinces himself that he doesn’t need to build 5 more pounds of muscle and that he looks great already. In other words, Bill quits. Instead of reading different opinions, researching, tweaking his training and diet plan and training even harder, Bill settles for just 10 lbs. Bill will then either quit training altogether and try to maintain his body shape (which I doubt looks that good at that point) or he will still go to the gym but less frequently. Let’s say he still goes to the gym, but now he only goes 3 days a week instead of 5 and trust me when I that the number of days Bill trains for will decrease gradually as life and other circumstances take their toll. Bill will also cheat more often and loosely follow his diet plan and eventually he will just stop following the plan altogether since he is too busy now socializing, clubbing with the new ladies he is attracting and going on all these dates.
Lack of patience 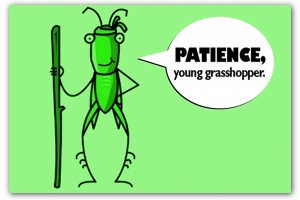 “Patience is virtue”. Or so they say. Whether you start weightlifting, doing cardio, join a dancing class or perform any other physical exercise, you must be patient. Since progress is not linear like we said and plateaus are bound to occur, you shouldn’t expect results overnight. In our example, Bill thinks that he will be able to put on 15 lbs. of muscle in 6 months, but things don’t work that way and progress could never be predicted. Look at it this way, if you have 20 lbs. of fat to lose, try to remember how much time it took you to accumulate that amount of fat. 3 months? 6 months? 10 years? It doesn’t matter how long it took you, what matters is that you did NOT wake up one day having 20 more pounds of fat on your body, right? It took a long time to gain that much fat and it also took plenty of effort, or lack of effort that is. You shoved your face with chocolate and cheesecake constantly for a long time which caused you to gain a lot of fat. While this is the opposite of progressing, same rule goes for progressing, it will take time and it will require plenty of effort. Yes, you will have to clean up your diet and eat healthier foods, but you will lose fat. Yes, you will have to train 5 days a week instead of just going out and eating at restaurants, but you will lose fat and gain muscle. Eventually, with time, you will look amazing and only then when you look in the mirror and see how much progress you’ve made, you will tell yourself that it was well worth it. In fact, you won’t even remember any of the struggles you had to go through, because it paid off. In addition to looking great, you also feel better, you’re more energetic, you’re happier and more content with yourself, you are confident and want to do so many things that the sky is literally the limit. If you lack patience, you will fail.
Your goals will change
As humans, our wants and needs constantly fluctuate. A man may be a womanizer today, but he won’t want to stay like this forever. At some point, he will want to settle down, build a family and commit to one woman. Much like a kid who wants a toy more than anything in the world, and when he gets it and plays with it for a bit, he will grow tired of it and will get bored. It’s in our nature. Our desires are in constant fluctuation. Same goes for exercising and exercise-related goals. Bill wants to start training to attract women, he thinks things will be easy, but little does he know his desires will change. 3 months into weightlifting, things get a bit harder, Bill struggles financially and meets a beautiful woman coincidentally, will Bill’s initial motivator remain the same? Of course, not. And even if somehow Bill keeps weightlifting for the sole purpose of getting girls, and he eventually does succeed at doing so, he will grow tired of it and his desires will disappear. And before the blink of any eye and the absence of his main exercise motivator, Bill’s weightlifting and diet sail away with his old toy. He WILL stop training altogether since there is no need to do anymore. On the other hand, if you are like David, you will respect the process and appreciate the outcome. You know that you are constantly getting stronger, looking better, feeling better, improving your health, increasing your energy levels, increasing your life expectancy…etc. these are all associated benefits that you will reap if you keep pushing through the process. Now, you tell me, which mentality will withstand time and difficulties? I think the answer is clear.
In essence, David will definitely be more successful than Bill. David sees the true benefits of exercise and that attracting the opposite sex is nothing but an amazing bonus. Yes, we all want to be more attractive, but it shouldn’t be your main motivator to do things, especially something that involves an extensive process like working out. David will ultimately reap ALL the benefits associated with working out and more. His confidence will also grow more everyday whether he sees visual progress or not, because he knows that you don’t always need to see visual progress to be actually making progress. He will keep pushing and not stop till he achieves his dream physique, and even then, his goals will change and he will want more! Greed is another part of human nature, but in this case, being greedy for more progress, health and aesthetics is not a bad thing.
Bottom Line
While we all want to seem more attract to the opposite sex, do not make it your main motivator to start working out. You will face many obstacles along your physique-transforming journey, and such an extrinsic motivator will do nothing but give you anxiety since you are so eager and impatient to achieve your goal, and this will cause you to eventually quit. Also, when you quit after this long process, you will reap negative feelings such as: decrease in self-esteem, feelings of shame and guilt and overthinking. You will feel like you’ve failed yourself and will mentally punish yourself for it, and this my friends, will yield nothing but more mental stress and lack of confidence. Believe in yourself! Start training ONLY for yourself, and the results will come, I guarantee. After all, motivation sucks.