This series of articles was inspired by a conversation with a friend of mine. He was complaining of little to no gains despite fixing his diet, training program, and bad technique. My friend is not close to his genetic potential. Thus, he still has plenty of room for growth. Even though there could be a million other reasons why he is experiencing virtually no gains, coincidentally, he brought up a shoulder injury that he’s been trying to deal with for a while. First thing that jumped to my mind was “Do you take NSAIDs btw?”. “Yes, every day.” he said. That’s when I realized that his daily use, or, abuse of NSAIDs could be severely impacting his ability to recover from workout to workout.
NSAIDs – non-steroidal anti-inflammatory drugs -, or pain killers, are the most used drugs on the planet. It is estimated that more than 30 million Americans take NSAIDs every day. Moreover, they’re the only type of drugs that haven’t been demonized as much as all the drugs out there. We all grew up around pain killers, and taking them to relieve pain was something normal that we all did. Suffering from a bad headache? Pop an Advil. Your arm hurts? Just take some Tylenol. Woke up with lower back pain? Meh, just take some Aleve. Even though NSAIDs are the most mainstream drugs, they could be more harmful than most people think. Moreover, they hinder a fitness enthusiast’s progress by impairing muscle growth! NSAIDs can impair muscle growth through two different pathways: 1) Blunting muscular inflammatory response to strength training. 2) Interfering with satellite cells activity.

Bodybuilders will do anything to build more muscle! They’re willing to experiment with the least-researched drugs in hopes of gaining a bit more muscle. A strange phenomenon surfaced among bodybuilders approximately 2 to 3 decades ago. Bodybuilders would pop 2-3 pills of their favorite pain killers as part of their post-workout ritual. Their rationale was that if they could blunt the inflammation process that accompanies resistance training, they would speed up recovery, prevent DOMS, and gain more muscle. Fortunately, this trend died not very long ago. Ironically, those bodybuilders were unknowingly impairing recovery and may have impaired their long-term gains. 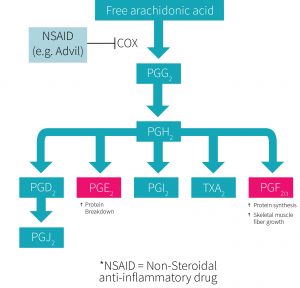 If you ask someone what they think of when they hear the word “inflammation”, they will spew out a list of negative characteristics. It is crucial to differentiate between chronic inflammation, localized inflammation, and acute inflammation. Chronic inflammation is what anyone needs to avoid. A state of chronic inflammation wreaks havoc on all bodily functions, including muscle growth. Chronic inflammation will undoubtedly result in sub-optimal health and can cause a myriad of other problems. However, a little bit of inflammation is good and necessary. Inflammation happens when the body’s white blood cells release certain chemicals into the bloodstream or affected tissues to protect them from foreign substances. Thus, inflammation is an essential component of tissue repair. As discussed in the “DOMS” article, localized muscular inflammation accompanies a bout of strength training. This is a case of “good” inflammation. Following a bout of heavy resistance training, arachidonic acid, an omega-6 fatty acid, converts into proinflammatory prostanoids. Prostanoids have been shown to activate multiple pathways that initiate muscle protein synthesis. NSAIDs reduce the perception of pain by inhibiting cyclooxygenase (cox), a group of enzymes that convert ARA (arachidonic acid) into prostanoids. Therefore, NSAIDs directly blunt the inflammatory response within muscles which severely hinders muscle recovery and tissue repair. Result? Sub-optimal recovery = less muscle growth.

Popping an occasional pill or two of pain killers is less than likely to cause any substantial harm to your muscle-building efforts. However, living in a word where “more is better” is the motto, I’d prefer to demonize NSAIDs entirely. It’s not strange for people to take up to 6 pills of pain killers per day! Besides their negative effects on short and long-term muscle growth, NSAIDs have some serious side effects. Some of those are liver and kidney toxicity and cardiovascular problems. Stay away from NSAIDs. Oh, and leave Aspirin out of your “ECA” stack. If you must take a pain killer, take the LEAST amount possible and dose it further away from your training session. This is one of those cases where “less is more”.