I still remember the day I first found out about IIFYM, and it was a remarkable day indeed. I mean, I could eat anything I wanted as long as it fit my macros, and I could still look great. What could possibly be better than this? Pizza, fudge brownies, lava cakes, cereal, peanut butter, fried chicken, buffalo wings and many other highly palatable foods crossed my mind at that moment. I might’ve even drooled a bit!. Being the food lover I am, I thought I had stumbled upon the perfect approach to dieting: “a calorie is a calorie regardless of the source”. Yes, most of my calories should come from “clean” (whatever those are) foods, but I would still have a good amount of leeway to fit in odd and foreign food selections into my diet so long as they fit my macros. Days went by and I made a bit of progress, but sooner rather than later I realized something: I wasn’t making as much progress as I had hope for! I had been training hard for the past X months and my progress seemed to be crawling at best. Could it be my diet? But, I am following IIFYM and I eat “clean”! WTF could it be? It must be my genetics! Fast forward to today, where I am older and wiser and wish I had known back then what I know now. I was lucky enough to learn from many great minds in the online fitness community as well as from fitness insiders at my job. After all, it seems that my training program and diet were suboptimal! No sh*t! Worst of all, it was mainly my diet plan. So, why on earth wasn’t IIFYM working for me? Because IIFYM is often misapplied in extreme ways and used as an excuse to “cheat” rather than as a valuable tool that lets you enjoy life, food and social events. Let’s see why.

The “calorie is a calorie” fallacy

Ask a 5th grader if he thinks 100 calories from vegetables are superior to 100 calories from sugar and he will tell you it’s the former! Even though this seems like common sense, a few studies will be cited as references. A very common misconception when it comes to calories in general and IIFYM in particular is that whether you get your calories from vegetables, fruits, whole grains, and unprocessed meats, or from brownies and sugar, your body will process those calories the same way. And that whether you lose weight or gain weight will be dependent on your net energy intake. If you end up in a caloric deficit, you will lose weight. If you end up in a caloric surplus, you will gain weight. While this is definitely true (1st law of thermodynamics), it speaks nothing of body composition. In other words, whether you lose or gain weight depends on your caloric intake, but if you want to build muscle and lose fat – like we all do – you’re much better off getting your calories from whole unprocessed foods. One observation that backs up this claim can be found in looking around to see whether or not IIFYM has increased the number of good physiques in the fitness community. You would expect that with such a flexible dieting approach, it would be easier for people to stick to their diets and thus transform their bodies. Unfortunately, this isn’t the case. And although IIFYM is certainly not fully to blame, it was a major contributor to this common naive belief that someone could eat whatever they want and still look superb. This may be possible, but only to an extent. If you eat like crap, you’ll look like crap! After all, if you ask any of us whether we want to eat vegetables or brownies and pizza, I am sure most of us will choose the latter. 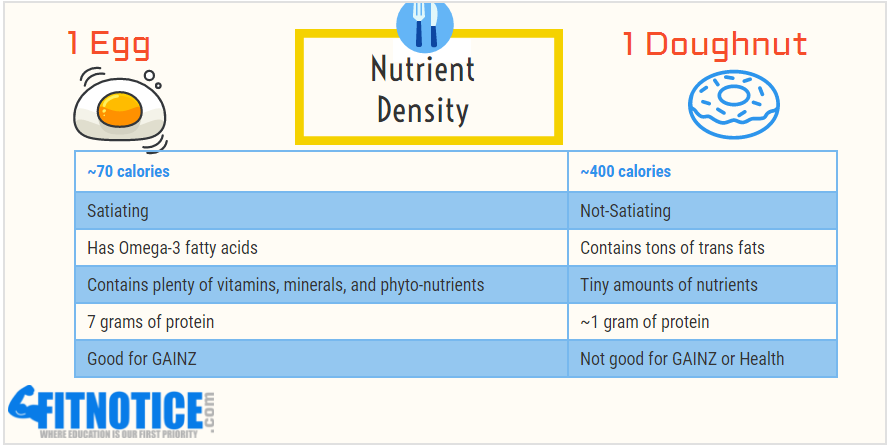 One of the main reasons a sound nutrition plan is superior to the eating-whatever-you-want approach is that a solid nutrition plan will almost always see you consume more micronutrients. If you suffer from any vitamin or mineral deficiencies, your body will not perform as optimally as it might. This might yield lackluster results in the gym and suboptimal health. 100 calories from vegetables – which is a lot of vegetables – will provide you with more vitamins, minerals and other micronutrients (known and unknown) than 100 calories coming from fruit Jello. The latter may provide some nutrients, yes, but the density won’t be nearly as much as what you will get from a gigantic salad.

A recent study that was published a few days ago (Karl Et al. 2017) compared the effects of whole grains and refined grains on metabolism and calorie loss during digestion. Unsurprisingly, the group whose diets were composed of whole grains experienced a boost in metabolism and 100 calories more burned during digestion. Put simply, this group retained fewer calories from the food they consumed than the group that ate refined grains. While some may think 100 calories is not much, if such a trend were to continue over a long period of time, favorable results would be witnessed. Additionally, those 100 calories that were lost were from JUST ONE MEAL! The vast majority of us don’t eat just once a day. And if we do, we wouldn’t eat that little. So, realistically, this calorie-loss trend could be replicated at least a few times a day, which would contribute to further calories being burned. This, of course, will only occur if your diet plan is composed of whole foods rather than refined and processed foods. Here is an example:
Meal 1 (just like the study) results in 100 calories less retained
Meal 2 (another whole food-based meal) results in 75 calories less retained
Meal 3 (same as above) results in 100 calories less retained
Total calorie-loss in ONE day = 275 calories!
You, my friend, have now burned 275 extra calories simply by eating! Those meals didn’t cost you anything extra, supplied you with plenty of essential nutrients and improved virtually every bodily function you could name. In turn, this will yield much more favorable body composition.
While everyone is talking about this study, many have forgotten about a very similar study that came to the same conclusion. That trial was conducted approximately 6 years ago (2010). Barr et al., 2010, compared the differences thermogenic responses from a WH (whole food) meal to a PF (processed food) meal. Both groups’ meals contained the same ratio of macronutrients, but the WH group experienced a greater thermogenic effect that resulted in 137 more caloriesburned (19.9% of meal energy)! On the other hand, the PF group witnessed only 73 calories burned (10.7% of meal energy). That is about 65 fewer calories retained just from making smarter food choices. What’s even better about this study is that the researchers took into consideration macronutrient intake, which is relevant to the IIFYM approach. Still think a calorie is a calorie?
Could it be the higher fiber content that results in this metabolic boost? Perhaps.
Could it be the higher nutrient density of whole food? Could be.
In the grand scheme of things what matters to us, the dieters/fitness enthusiasts, is that whole food will always be superior to processed low-quality food.
NOTE: keep in mind that this phenomenon could be replicated multiple times a day which would yield significantly more calories burned (less retained).

In addition to nutrient density and an increased thermic effect (and thus less calories retained from smarter food selections), whole food will usually yield better satiety. I say usually because some “processed” food can also have a great effect on satiety. For instance; sugar-free jello is technically a processed food that is low in calories and sure to help fill you up. It is mainly gelatin and water, but it is still minimally processed. But in most cases, a 200-calorie salad, which would amount to pounds of vegetables, will surely fill you up and curb your hunger for hours. Compare this to consuming a piece of cheesecake (200 calories) and you will get my point. IIFYM doesn’t take any of this into account. A nutrition plan that revolves around whole, unprocessed food will have a significantly higher effect on satiety which will in turn result in decreased energy intake and thus better body composition and fat loss (depending on your goal).

By now, you might think that I am anti-IIFYM. I am not. But I am against taking IIFYM to the extreme and following a diet plan of shoveling whatever you want in your face-hole under the notion that calories are calories and macros are macros regardless of the source. This is where the “benefits threshold” comes into play. Your nutrition plan might look perfect, but just because you are eating only vegetables, fruits and lean meats that doesn’t mean you will improve your health and body composition even further. Just like most things in life, there is a threshold/limit to how far healthy food will contribute to your health. And just eating MORE healthy food after you reach that threshold doesn’t necessarily mean you will experience greater benefits. This is why I recommend the 80-90% approach, which should allow you to reach your threshold and still have a bit of leeway to fit in something you’ve been craving without hindering your progress.

We can’t talk about anything fitness related unless we mention genetics! As usual, some genetically-gifted individuals can get away with eating crap and looking phenomenal. As for the rest of us regular folks, we must be more careful with our approach to dieting. I personally know a few people who eat tons of junk food on almost a daily basis and somehow, still manage to look great (I am certain they’re not “on” anything). But, here is the thing: even those genetically-gifted individuals will start to look like crap if they take their bad habits too far. Once again, there is always a threshold. If those guys only eat junk food all day/every day, they won’t look half as good as they usually do. Nonetheless, they have more efficient digestive systems and metabolisms that allow them to get away with more low-quality food. That’s the inequity of life; deal with it.

None of this is not to suggest that IIFYM is completely useless and should be discarded entirely. I just wanted to point out a few flaws in this approach or rather, how many people apply it. We all crave delicious food; thus, we intentionally or unintentionally tend to take this approach to the extreme and neglect the importance of intaking whole foods, vegetables, fruits, dietary fiber and micronutrients. You have tremendous latitude in regard to food selection, but this liberty will only be earned once AT LEAST 80% of your diet is composed of “real” food. Oh, and stop abusing IIFYM.