This one has already been covered by a few bloggers before. The main point is that we can have two different people who have the same body fat percentage, yet they would look immensely different! Let’s look at two examples: 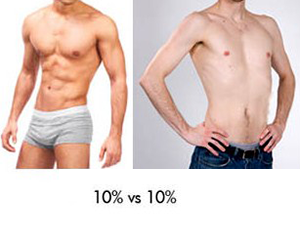 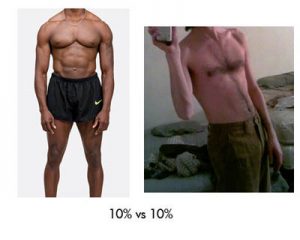 After looking at the two pictures above, you are probably already confused! Those 4 individuals have the same exactly body fat percentage yet they look drastically different. How is that possible? The main difference between those four individuals is the amount of lean body mass each one of them has. For instance, in the first picture, the person on the left has at least 10-15 lbs. more muscle than the skinny dude on the left, thus giving him more definition and a more muscular look. The person on the right looks like he doesn’t even know what the word muscle means! Nonetheless, the more muscle you have, the leaner you will look. This is also true since muscle mass pushes up against the skin which gives you an even leaner look, but fat mass doesn’t have this effect!
In the second picture, the individual on the left has about 20-25 lbs. more muscle on his frame than the person on the right. Thus, the person on the left has a better, more defined and a more aesthetically pleasing look. Keep in mind that all those individuals have the same exact body fat percentage.
NOTE: Body fat percentage is a mere ratio. It’s the ratio of non-fat mass (muscle mass, water, organs, bones…etc.) to fat mass (body fat). So, those 4 individuals probably have different weights as well, but not necessarily since the same principle can apply to two individuals with the same height and weight but different musculature. Example:
Person A is 6″ feet tall and weighs 180 lbs. at 20% body fat. Thus, this person carries 36 lbs. of fat and 144 lbs. of lean body mass.
Person B is also 6″ tall and weighs 180 pounds, however, this person has a body fat percentage of 10%. Thus, person B carries 162 lbs. of lean body mass and only 18 lbs. of body fat!
The end result is that both individuals will look drastically different. But, this isn’t the whole story because body fat percentage and visual appearance are also impacted by a few other factors. This leads me to the next point.

We are all different. One of the many benefits of exercising and transforming your body is that you learn a lot of things about the human body and your own body in the process. No two people are alike on this planet, including twins (to a lesser degree, of course). Every person has his own unique genetic code that dictates all his/her physical and mental characteristics. Thus, you shouldn’t expect to look like someone else no matter how hard you try. And you shouldn’t try to look like someone else anyway! Instead, focus on becoming the best version of yourself because there is only one “you”. With that said, so far we learned that differences in lean body mass impact our aesthetic appearance greatly, but one question may have crossed your mind: what if we have two people with the same weight, height, body fat percentage and amount of lean body mass, shouldn’t they look exactly alike? No! Before I explain why, let’s look at the following pictures: 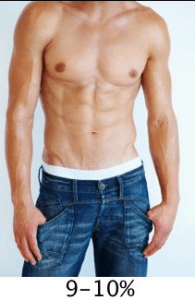 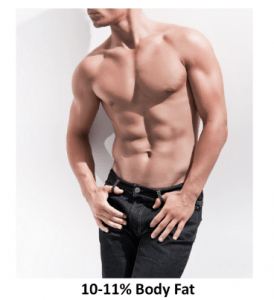 Both individuals in the pictures above at roughly around the same percent body fat, but they still look quite different. Their level of muscular development is also quite close and they seem to be of similar height which makes this comparison more viable. The person on the left has more definition in his arms, shoulders and midsection than the person on the right. How could this be? Body fat distribution is the answer! We are all genetically pre-disposed to distribute fat in different patterns. Some people have extremely lean arms and faces even at high body fat percentages, yet they seem to store almost all their body fat on their midsections! Some people store body fat evenly throughout their bodies which gives them a leaner look even at high body fat percentages. Some individuals store more fat on their arms, chest and legs than the rest of their bodies. You get the point. Every person has a unique body fat distribution pattern that is dictated by his or her genetics and there is no way to change that. The only thing you can change is to lose fat and your body will take care of the rest!

Generally, the taller someone is the leaner he/she will look. This is basic common sense. An individual who is 6 feet tall and has a body fat percentage of 10% will usually look leaner than a 5″8′ individual who also has a body fat percentage of 10%. Note that weight and amount of lean body mass still play a significant role in how both individuals will look. However, the taller individual’s fat mass will be dispersed over a larger physical area (body) than the shorter individual and as a result he will look leaner.

Your hair color is not the only thing that changes as you get older! When it comes to body fat percentage and aesthetic appearance, age plays a huge role on how someone looks. As we age, our bodies start to store more fat around our organs (visceral fat) and within muscles (intramuscular) as opposed to subcutaneous fat (under the skin). Thus, a 40-year-old individual with 10% body fat and lean body mass of 165 lbs. will look leaner than a 20-year-old individual who has the same body fat percentage and amount of lean mass! The former will look leaner despite having the same exact amount of fat mass. The difference is that the older person’s fat mass is “invisible”. Additionally, older persons have what’s called “mature muscles”. Mature muscles as eloquently called in the bodybuilding realm simply refers to muscles that aged well and thus have more definition and visible striations. Next time you are at the gym, look around to find an old guy/gal who are somewhat muscularly developed. You will inevitably notice how defined and striated their muscles are as opposed to younger individuals.

I know I have covered part of genetics above when I mentioned body fat distribution, but there are more genetic factors to address. Here are a few factors that can and will make individuals look different at the same body fat percentage with everything else being equal (age, height, gender, muscular development…etc.): 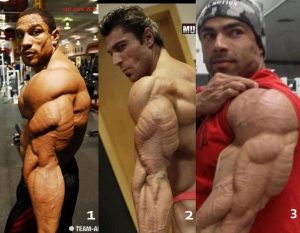 While those two ways provide good estimates, they are by no means 100% accurate. There is a still a margin of error. So, if you see a picture of a person who is supposedly 10% body fat, he could be really at 12% body fat due to unintentional measurement error (margin of error). And vice versa. Thus, it’s naive to say with confidence that an individual is precisely at a certain body fat percentage.

Am I doomed forever?

Okay, this subtitle is a bit misleading. Body fat % does matter when it comes to improving your health and aesthetic appearance, but what I mean is that you shouldn’t focus on reaching a specific number of figure. Instead of constantly chasing 10% body fat, you should aim to lose as much fat as possible until you get to the point where you are happy with how you look, feel great, healthy and able to maximally perform at the gym or whatever physical activity you do. So, constant visual checks are your best way to achieve a certain goal. The mirror is your friend. Don’t get too worked up on numbers and how some people look. After all, there is only one you as cliché as this sounds. Here are some ways to help you track your body composition changes:

Bottom line
Body fat percentage pictures are nice and can be fun to look at and visualize yourself at that same body fat percentage, but the truth is that you will never look exactly the same as that person in the picture! So, why bother stressing over something that is unrealistic and unnecessary? Focus on becoming the best version of yourself. Focus on losing fat until you are happy with how you look. Do not chase exact numbers because they don’t mean crap in application. Change your mindset so that instead of wanting to achieve “10% body fat” you would want to look lean with visible abs and maybe some vascularity. The truth is, no one knows what you will look like at a certain body fat percentage, so just get down to that level and discover what you will look like. The journey will be more than worth it. Save your energy and mental health and focus your efforts on building muscle, losing fat and improving your health and performance.