Artificial sweeteners have been around for some time now, but their demand is higher than ever. With a healthier lifestyle going mainstream over the past decade or so, more people are watching their caloric intake as well as hormone levels, including insulin, more than any time in history. Artificial sweeteners are used in almost every low-calorie processed food and beverage. However, artificial sweeteners safety has been the center of debate ever since they became popular. Many people claim they’re safe while others claim otherwise. Where is the truth? Do artificial sweeteners cause cancer like many people believe? Let’s see

What are artificial sweeteners? 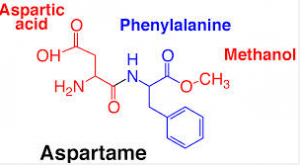 As you can see in the picture above, aspartame is synthesized by fusing two amino acids together, more precisely, aspartic acid and phenylalanine which creates a sweet substance that is 200 times sweeter than table sugar. If you don’t know this already, amino acids are the building blocks of protein, thus you are already consuming “aspartame” every time you eat a piece of chicken (protein) or any other protein-rich food! Ironic, huh? Aspartame is probably the most controversial artificial sweeteners on the market. Additionally, aspartame is the most used artificial sweetener in the whole world. Aspartame is used in over 5000 products worldwide. When consumed, our bodies break down aspartame into aspartic acid, phenylalanine and methanol. Methanol can be toxic in VERY HIGH amounts, however, the amount we get from broken down aspartame is so tiny that it is less than what we can find in natural foods. You know what else can be lethal? Ingesting a large amount of sodium, that will blow your head up! I hope you see my point now. Since aspartame’s use is so widespread and has been around the early 1980’s, how come we did not notice a significant increase in cancer patients who have been consuming aspartame? Simply, because it is NOT carcinogenic! When people mention that artificial sweeteners are carcinogenic, they are knowingly or unknowingly referring to aspartame. During a few clinical studies conducted by Italian researchers on rats, aspartame was found to induce cancer in different regions of the body and especially in the urinary tract and blood. However, if we want to really argue whether aspartame is carcinogenic or not, here is a meta-analytic review that concluded aspartame has no significant carcinogenic effects in rodents! Furthermore, the FDA and EFSA called the conclusions unreliable due to lack of important markers and data in those studies. In other more controlled trials, rats were fed insane dosages of aspartame that reached 4 grams per kilogram per day over their lifetime, and even then, aspartame did not cause any health problems in the subjects! Additionally, studies that have been conducted on humans did not find any connections between cancer and aspartame consumption.
Since Obesless aims to provide science based real information to its reader without any biases, I always conduct research and look at different and opposing point of views regarding a topic. During my research on aspartame’s safety, I came across an article at Mercola.com where the writer claims that aspartame is the worst thing you can put in your body. Ironically, if you scroll down that article you will see that he is trying to sell you his e-book “sweet deception”. To summarize his article, its complete unscientific garbage and he is an idiot. He bases his claims on the fact that Methanol is found in aspartame and it is toxic. Well, methanol is toxic in super high dosages and aspartame’s content of methanol is even less than what could be found in foods! Additionally, you know what else can be lethal? Water! Try drinking 50 liters of water in a day and see if you will live or not. Stop presenting data to readers as if they are science based when they are nothing but opinion based information that aims to generate personal profit. That is not ethical nor safe. Hopefully your readers don’t listen to you on that one. He even goes on to claim that fructose is toxic. Fructose is the naturally-occurring sugar in fruits. I guess all of us will die soon because we eat fruits!
Note: Patients who have phenylketonuria should limit their intake of phenylalanine and consequently aspartame.
Final verdict: Aspartame is safe for human consumption and you shouldn’t limit your intake of it as long as you do not have phenylketonuria. Drink your diet soda, guys. Or if you use Equal or NutraSweet, do not discontinue usage because of some unscientific rumor based information on the internet. It should be enough to say that aspartame is allowed in the United States and the FDA personally regulates it. 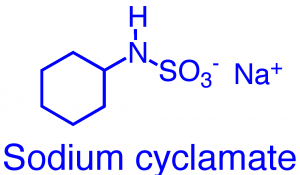 Cyclamate or sodium cyclamate (twin sugar) is another popular artificial sweetener that is 40-50 times sweeter than regular sugar (sucrose) and was discovered in 1937. Cyclamate is not as popular as aspartame, however, many people might recognize its small yellow packets label “twin sugar”. Manufacturers do not often use cyclamate as the only sweetener in their product, so they mix it with saccharin (sweet ‘n low) to produce a very sweet and cheap artificial sweetener. Chemically speaking, cyclamate consists of cyclamic acid’s sodium and it was discovered coincidentally by Michael Sveda, a student at University of Illinois at the time who was experimenting with different chemical compounds in an attempt to create an anti-fever medicine.
Just like aspartame, since cyclamate has been around for almost a century and many people have been using it knowingly and unknowingly, how come no cancer epidemic has occurred yet? I mean with all these different carcinogenic artificial sweeteners on the market we should all be dead by now!
Sodium cyclamate is banned in the United States and has been banned since 1980, but it is still sold in more than 100 countries including European countries and Canada. The commissioner of the FDA originally based his decision on the fact that no clinical studies have shown that sodium cyclamate is safe for human consumption and that it isn’t carcinogenic. In 2006, a review paper published in Food and Nutrition Research indicated that cyclamate was found to cause bladder cancer in rats. On the other hand, in 2000 another study published in Toxicological Sciences concluded that cyclamate was not found to cause any health problems in monkey even in high dosages!
Note: Sodium cyclamate might be banned by the FDA, however, the owners are working on getting it re-approved.
Final verdict: While cyclamate seems to be safe since it is approved and regulated in more than 100 countries, I would still put cyclamate on the side due to lack of studies. However, the populations that consume cyclamate should’ve witnessed a spike in cancer levels if cyclamate was carcinogenic. Since we sodium cyclamate is banned in the U.S. anyway, consuming it intentionally or unintentionally shouldn’t be a concern. 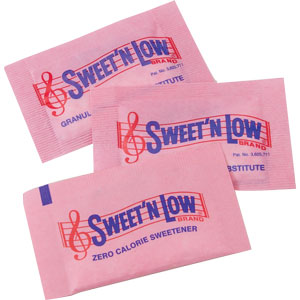 More specifically, Saccharin -Sweet N Low- is one of the most popular artificial sweeteners on the planet. I personally don’t like sweet ‘n low due to its bitter taste, but some people like it more than others. Saccharin was the first artificial sweetener in history, and it was discovered coincidentally by Fahlberg and Remsen. Fahlberg literally stumbled upon a sweet substance as he was working on a different project in his laboratory (Michael Sveda, is that you?). He then traced back his steps in the lab to recreate this compound, which is now known as sweet ‘n low. Sweet n’ low usage increased dramatically thanks to the first and second world wars when food supplies and funds were limited. Since people have an innate passion for sweet tasting foods and they couldn’t buy sugar due to unavailability and increasing prices, they started using saccharin as a food additive to enhance the sweetness.
In the early 70’s, some studies found saccharin to cause bladder cancer in rats. I’m not sure why all the early studies on artificial sweeteners found bladder cancer in rats. Perhaps those studies were all conducted by the same researchers, ha! Anyway, when those studies came to their conclusion, the congress ordered manufacturers to place a warning label on the packets until more studies that the congress had mandated were conducted. Since then, more than 25-30 studies on humans all came to the same conclusion; saccharin is absolutely safe for human consumption. Thus, the congress took that new data in account when they decided that saccharin packets no longer need to have a warning on them.
Final verdict: Saccharin, or Sweet N Low is safe for human consumption and you shouldn’t be concerned with any potential rumors claiming otherwise. Saccharin is another artificial sweetener that is regulated by the FDA.
Bottom Line
This concludes the first part of the artificial sweeteners safety. First generation sweeteners are all safe for human consumption and are not carcinogenic whatsoever. The only debatable artificial sweetener is cyclamate, however, due to its widespread use in over 100 countries, it should be assumed that it is safe for human consumption as well. Thus, stop listening to rumors on the internet or from gurus that try to debate artificial sweeteners safety only to sell you an alternative product or guide at the end of that same article. Artificial sweeteners are safe, period. In the second part of this series I shall address second generation artificial sweeteners safety and whether they’re suitable for human consumption or not. Stay tuned.
PS: There will be a third part, and it will very enlightening, I promise.
Make sure you share this article with your pals on social media to show them that artificial sweeteners are safe. You should also share this article to show those who claim the opposite that they need to read a bit more!

References
Cancer.Org. (2014, May 28). Aspartame. Retrieved from http://www.cancer.org/cancer/cancercauses/othercarcinogens/athome/aspartame
Mallikarjun S, S. R. (2015). Aspartame and Risk of Cancer: A Meta-analytic Review. Retrieved from PubMed: https://www.ncbi.nlm.nih.gov/pubmed/24965331
FDA.Gov. (2015, May 26). Additional Information about High-Intensity Sweeteners Permitted for use in Food in the United States. Retrieved from U.S. Food and Drug Administration: http://www.fda.gov/Food/IngredientsPackagingLabeling/FoodAdditivesIngredients/ucm397725.htm#Saccharin